Snaking across a vast length of China, protecting an ancient border from marauding hordes from the north, The Great Wall of China, a UNESCO World Heritage site is one of the few man-made structures that, at least according to space mythology, is visible from the space station. Although it may be a cliché bucket list item, it’s one that truly ought to be on a traveler’s radar. We finally visited it this spring.

We left the marvelous Four Seasons Beijing on sunny morning heading for Badaling Great Wall Funicular, one of the points at which gaining access to the wall relies not on a half-day climb, but a shiny new funicular on the north side of the wall.

The Badaling section, less than a two-hour drive from downtown Beijing, is one of the best-preserved parts of the wall and somewhat more accessible because it is not as steep as some sections.

After exiting the funicular, we left our tour group to walk the wall on our own. What a beautiful day it was standing there imagining what it must have been like back in the day when the wall actually served a purpose for protection and not tourist amusement. It’s hard to fathom something so ancient that construction on parts of it began some 2700 years ago, although as you probably know, not all of the wall is that old. In fact, much of the oldest part is now in ruins. What we visit is much younger, perhaps only 600 years.

And speaking of tourists, most of the other tourists we encountered were not from foreign countries; rather they were Chinese nationals who were visiting the wall for the first time themselves. And the young ones could not get enough of taking selfies with us Westerners in them!

So why did our tour guide take us to the north side you may reasonably ask? After all, this funicular is more expensive than other options, Well, just take a look at a photo of the south side access… 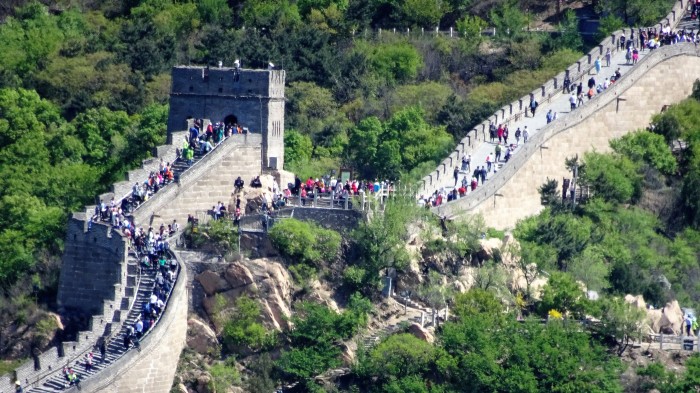 Now see where we were…

When you visit – because visit you must – take it slowly, and wear good walking shoes. As you look at the tower ahead of you and up at what looks like a mild incline, don’t be fooled. It’s much steeper than it looks. And hope for sunshine!

Whenever you pick up a postcard on your travels (even if only to look) you’re likely to find that that postcard-worthy photograph has the following characteristics: it’s framed to show the scene from its best perspective (which includes being minus the mobs of people who might be there from time to time) and the weather – if it’s an outdoor photo – will be perfection. For most people we know who have visited Beijing and The Great Wall of China, finding that perfect-weather day where the sun is shining, the air is clear and the crowds are minimal, seems just about impossible. But we did it. We were there that day. Let’s back up…

Using a small cruise ship – the Silversea Silver Shadow – as our transportation, we leave Shanghai to traverse the Yellow Sea enroute to Beijing. But Beijing isn’t on the coast, you might reasonably interject. No, it isn’t, but that won’t stop us from visiting inland. Before we left home in Toronto, we booked what Silversea calls and “Overland Journey.” This means that in mid-cruise, we will leave the ship, travel by bullet train to Beijing, tour the city, overnight in a first-class hotel, visit the Great Wall the next day, then rejoin the ship.

We arrive in the early hours of the morning to the eerily silent cruise-ship terminal in the port of Tianjin. 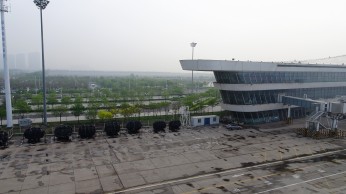 Steeling ourselves for the fact that this is a group tour (and everyone knows how much we love a group excursion – not!), we meet the tour guide shore-side then board a surprisingly well-appointed bus that leaves precisely on time and transports us to the Tianjin train station. It is a huge facility. Since we have a bit of time before we have to board our train, we take a walk around the terminal. It’s a peculiar feeling to be examined so closely by so many sets of eyes, as if they have never seen a people from the West, and it turns out that many of them in the station that day had seen very few.

We finally board the train for the 35-minute ride to North Beijing station at a speed that reaches 297 km/hour – we know this since the speed at which the train is travelling flashes across the screen in the front of the car. If we had taken a bus a many of the other cruise-ship passengers did, it would have taken upwards of two hours to get there. We arrive in Beijing. Despite the expectation that we will suffer from the smog, we marvel at the clear sky and sunshine. Our guide explains to us that it rained heavily the night before and the ever-present pollution is now spattered on every car, window and leaf. We notice. Then we are off to visit the Forbidden City.

The largest imperial palace in the world, The Forbidden City is truly the heart of Beijing. It was constructed in the fifteenth century through the efforts of over 1 million workers over a period of 20 years during the Ming Dynasty and was the imperial home of 24 Emperors of China for over 400 years. It comprises some 980 buildings and almost 9000 rooms! Forbidden to the common Chinese for centuries, it ceased being the seat of Chinese power in 1912 with the abdication of the last emperor of China. (Have you seen the film The Last Emperor? It was filmed here.) Of course, now it is known as the Palace Museum, because that’s what it is. According to our guide, it’s not very busy today. We beg to differ.

We spend time getting to the heart of the city through a series of courtyards and are mildly disappointed that you can’t actually go into the buildings. Even the throne room must be viewed from afar. But the architecture! Amazing. Tiananmen Square is next on the agenda.

The square itself seems smaller than it looks on television news reports. We are all old enough to be remembering the infamous Tiananmen Square massacre in 1989, odd since the word Tiananmen is the name of the gate at the north end of the square that means “Gate of Heavenly Peace.” The two of us break off from our tour group (nothing new in that!) and walk the entire square taking in the buildings and monuments: The Great Hall of the People, the Monument to the People’s Heroes, he National Museum of China, and of course, the mausoleum where Mao’s body still lies in state (we didn’t get inside). But we also see beautiful gardens and more security cameras than we have ever seen in our lives – even in Monaco! It’s an extraordinary juxtaposition of the political and the aesthetic. 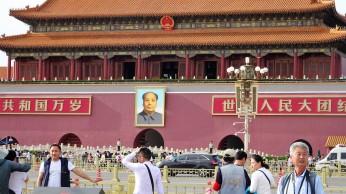 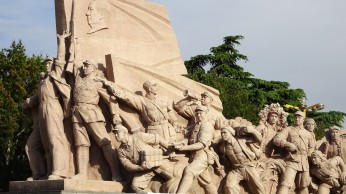 We notice that one thing is missing: city noise. According to our guide, sirens and other loud nose is forbidden in the area surrounding the square. It is oddly peaceful.

It has now been a long day and we check into our room at the Four Seasons Hotel Beijing. What an extraordinary property! We aren’t sure what we expected, but a five-star hotel smack in the middle of a very upscale, leafy neighbourhood of high-end shopping was not it.

The hotel has spared no detail in its amenities or décor. We choose the Asian restaurant (why would we choose North American while in Asia?) and are delighted with the ambience, the food and the service – the Chinese servers really seem to care. And even their halting English is a lot better than our Chinese, for which we are truly grateful. 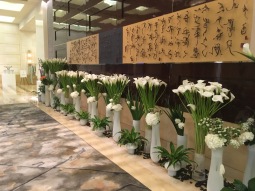 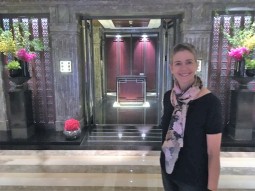 We have only one night at this wonderful, surprising hotel and would like to spend longer enjoying a night cap in the beautiful bar, but tomorrow we are visiting The Great Wall and have to be up early. So, good night from Beijing.

It seems to us that if everyone in the world just had the chance to visit one another’s countries, we would all understand one simple fact: we are all more alike than we are different. That has certainly been the case in China ( and in the past in Turkey, Chile etc.)

The more we see in this astonishing country, the more we wish our respective leaders could look into the eyes of the children and others on the streets and see the smiles…and smile back. We’ve been here in China through a long weekend where folks from the countryside flock to the cities to see their own tourist attractions, and these are people who have seen few Westerners. We have provided endless amusement, and have been asked on numerous occasions to pose with the kids and the older family members for selfies! We always agree to their delight.

In the past few days we’ve strolled Tiannamen Square, explored The Forbidden City, and climbed the Great Wall which was made even more outstanding as a result of our Silversea overland experience. We had the good fortune to have a tour guide who took us to the northern entrance to the Great Wall area and we climbed the wall in almost utter seclusion, far from the crowds we could see in the distance. Oh, and overnight in Beijing? The Four Seasons was beyond divine.

We are now on our way to Japan but will forever be grateful we visited surprising China. 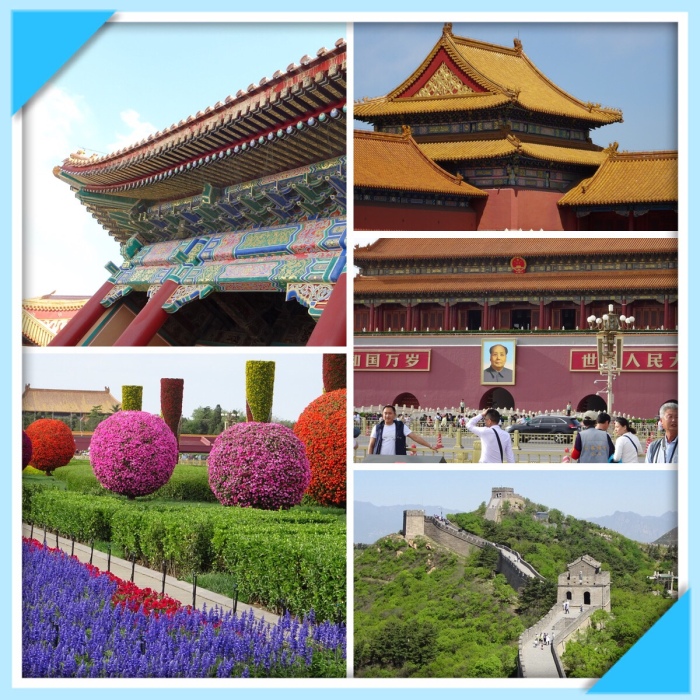