The promotional DVD was impressive: a group of white-uniformed ship’s employees standing waist-deep in sparkling water just off a beach on some unnamed tropical paradise.  Smiling, they offered caviar and champagne flutes to the beautiful people.  What kind of gimmick is that, we wondered? But, when we booked our Seabourn cruise of Caribbean yacht harbors, we were determined that we’d find out.  And we did.

The day began as we anchored off Prickly Pear Island in the British Virgin Islands.  It was a spectacular day with calm seas and brilliant sunshine.  We are not usually the type of travelers who like to spend entire days on a beach, reading, sunning and drinking.  In fact, our plan for that day had been to stay on board the ship until near noon, then to take the tender ashore just in time for the caviar ‘thing’ and the beach barbeque.  The thought of a beach barbeque and eating a hamburger in the sand wasn’t very enticing, but we thought we’d like to experience the event for ourselves.  Oh how wrong our preconceived ideas can be!

We made our way into the lounge where passengers awaited the tenders, just to see how things were going.  It was about 10:30 am and according to the crew members there, the preparations had all been made, crew had taken over to the island all of the trappings needed for the day, and we were free to go ashore.  Never wishing to wait in crowded lounges for anything, we looked around, saw nobody and quickly scooted back to our suite to change into bathing suits and gather beach accoutrements. 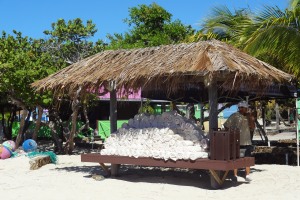 Within minutes we were aboard the tender making our way toward the beach.  As we arrived on the pier, we could see the grass hut where several hundred fluffy white towels had been individually rolled and stacked earlier by crew for the arriving guests.  A young crew member approached us and offered water or fruit punch.  We noticed that there were only a very few people who had evidently made it on to the first guest tender ashore before us – and this, despite the fact we thought the place would be mobbed.  Silly us!  With only 200 passengers on board in total, mobs were simply out of the question.  And it must be noted that this is a deserted island, save for the beach bar and grill that was commandeered by Seabourn for the day.  There was no one else there.

We made ourselves comfortable on lounge chairs mere feet from the lapping waves, and settled the umbrella so that we could have some shade.  Then the beach service began.  Barefoot bar servers from the ship, today in casual uniforms, delightedly served frozen drinks – any kind you want, as many as you want.  After sipping a frozen margarita, we explored the beach and discovered something wonderful.

There were to be not hamburgers eaten in lounge chairs.  No, Seabourn had something completely different in mind for its discerning travelers.  They had brought china, silverware, table cloths from the ship and had set up an open-air dining facility.  And on the menu was a vast array of barbequed pork, shrimp, and beef…too much food to even imagine.  Then there were the sides, salads, desserts – all brought from the ship that morning by hard-working crew members.

Late in the morning, the water sports activities were live. We spent some time enjoying the island from the water in a paddle boat and later Art water-skied.  All of these activities enjoyed while under the watchful eye of the two crew members aboard the fast rescue craft that floated unobtrusively offshore the whole day.

At around noon, the chef from the ship, accompanied by several of his bar staff took up striped sun umbrellas and waded into the water.  Shortly after, a rubber dinghy, driven by the ship’s captain (!) left the ship making its way toward the beach – they were bringing the caviar and champagne.  And so, we were served caviar by the chef himself while the bar staff happily opened bottle after bottle of wonderful champagne that the guests delightedly imbibed as they waded out of the water to the clicking of a hundred camera shutters.  What impressed us most is that the crew members all seemed to be having as much fun as the guests – they never gave the slightest hint that they felt it was work.

After this impressive hors d’oeuvre we took up plates and made our way through the buffet.  We had a wonderful lunch, not hunched over on a beach chair as feared; rather we ate at a white linen-topped table in the shade with a friendly American couple from the New York area, while sipping on a glass of chilled sauvignon blanc.

We were among the last guests to leave the island that day!  So, was the promotional DVD honest?  Absolutely – except for the champagne flutes.  No glass was actually permitted – you’ll have to watch our video to see…or you can just book a Seabourn Caribbean cruise and see for yourself!  Happy cruising!

4 thoughts on “Caviar & champagne on a beach? A cruise experience not to be missed”