A while back we mused about our 10 Rules of Engagement for Smooth Cruising. Among those “rules” was the following:

Rule #6: Never miss an opportunity to learn something new.

Although we choose a cruise holiday for a relaxing way to visit new places while being waited on hand and foot, any cruise you might consider taking is also a wonderful opportunity to actually learn something new.

A relatively new phenomenon in the cruise industry, hands-on cooking classes are available on only a handful of ships on only two cruise lines that we know about at this point. Oceania cruises pioneered this approach and evidently – although we haven’t experienced this since we haven’t sailed on HAL for some years – Holland America now offers this experience on several of its ships. Oceania offers this to groups of 24 lucky guests who register early enough on their two larger ships: the Marina and the Riviera. And we have taken classes on both.

We had no idea what to expect that first morning when we arrived in the cooking school to don our chef’s hats and aprons; we only knew that we were looking forward to that class on French Classics. Led by chef instructor Noelle Barille, we along with eleven other teams of two, were instructed in some of the fine points of classic French cooking and we were able to actually make several ourselves including classic haricots verts with shallots to accompany the Jacques Pepin roasted chicken, and classic quiche Lorraine. Later on that cruise we took a class on wok cooking and a brunch class.

What set this experience apart from others we’ve had on cruise ships was the sheer amount of organization and precise execution that was on show. The chef was assisted by two sous chefs and a kitchen worker who was responsible for cleaning up everything after us. Each time we were called to the front to observe the chef’s demonstration, when we returned to our stations (complete with individual work counters, sinks, cooking implements and induction cook-tops) the mise en place dishes were all lined up for us – pre-measured ingredients to facilitate the cooking process without wasting time to measure everything. Although to be truthful, it’s a prep technique that we took to heart and employ almost all the time at home now!

The chef herself was personable, extremely knowledgeable and entertaining – all important qualities for this kind of class. The experience was so useful – and the recipes so good that they are now in our permanent repertoire at home – that a few months ago aboard the Riviera we took three more such classes.

We were a bit nervous since that first time had been so good. The new chef instructor Karlis Celms was on his very first contract doing this and he had a hard act to follow. But follow it in good form he did! We enjoyed the three classes we took that time just as much (Asian cooking including a sushi experience, and two Italian-related ones including pasta-making). 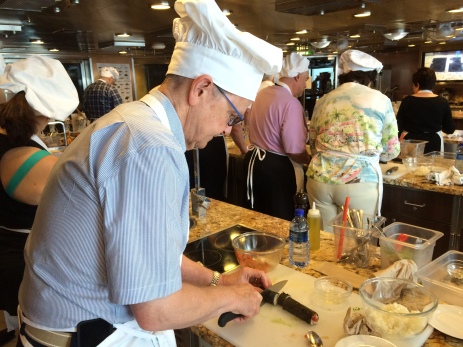 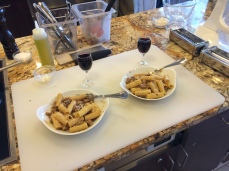 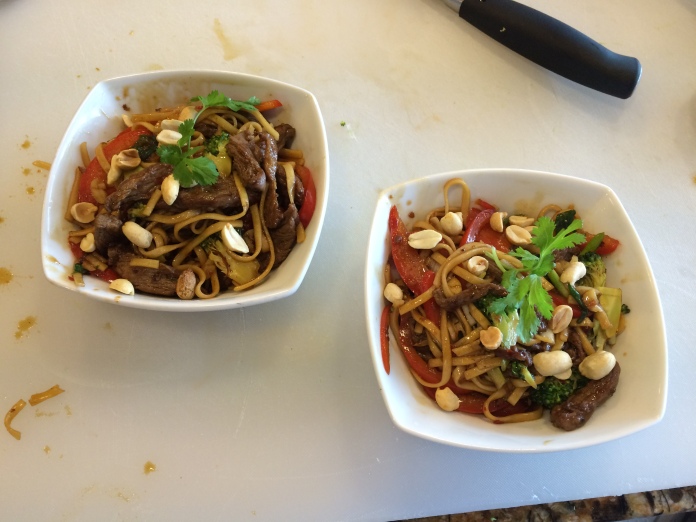 The $60-70.00 per person or so we paid for these courses was worth every single penny. We’re not planning another Oceania cruise in the immediate future (we’re booked back on Silversea for South America and the Panama Canal next year), but if we ever do, we’ll be back in the kitchen.