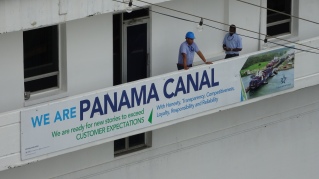 Listed as one of the “1000 Places to See Before You Die” in the book of the same name, the Panama Canal also stands as one of the seven wonders of the modern world” – man-made engineering feats that are testimony to the ingenuity and capabilities of modern men and women (among the others are the Channel Tunnel between the UK and France, the Golden Gate Bridge and Toronto’s own CN Tower to name a couple). All of that aside, transiting the Panama Canal has been on our personal “bucket list” for a very long time. We finally did it and it was impressive.

So, why is sitting aboard a ship as it makes its way from the Caribbean Ocean through a series of locks, one large and one small artificially-created lake, a canal and another set of locks such a memorable experience? We’re not really sure it’s a logical thing, but the experience of the transit was just as good as thinking about it for years in advance. And initially, it’s really all about the planning.

With the idea of transiting the canal in our minds, we embarked on a search to find the best route to get there. It would have to be on a cruise ship, we knew for sure. First there are those cruises that don’t actually transit the canal all the way from the Caribbean to the Pacific. They usually enter the Canal from the Caribbean side, make their way into Gatun Lake, the largest of the two man-made lakes, cruise the lake for a few hours and then go back through the Caribbean side locks to carry on a Caribbean cruise – a “partial Transit” as it is known. We wanted to go all the way through.

There are lost of cruises that begin in Florida – Fort Lauderdale or Miami – visit an island or two, transit the canal, visit a port or two in Mexico and then end in Los Angeles or even San Diego. We aren’t that stuck on Mexican ports, and had been to LA last winter. This approach would not have permitted us a real travel experience to see new places. So, it would have to be a canal transit that then turned southward upon exit. Enter the Silversea Silver Muse’s inaugural season, picking up passengers in Florida as it continued its way south and around the far southern tip of South America. That’s where we jumped on. So, you see, selecting a cruise for us is not focused on the cruise line or the ship per se. It’s not the cruise that’s the draw: it’s the itinerary.

When we boarded the ship (more about the ship itself in due course), we found we had lucked into a wonderful on-board lecturer experience. Silversea, to their credit, does offer an on-board enrichment program that provides in-depth information about the ports visited. For us, this was a very important feature on this itinerary since we were completely in the dark about places like Manta, Ecuador and Pisco, Peru (among others) before we embarked on this journey. Former journalist and on-board lecturer Corey Sandler made the entire cruise so much more consequential, and never more so than on the day we transited the canal. One interesting piece of trivia we learned from him is the price ships pay to transit the canal. Our online research suggested that many commercial ships pay around $30,000 (USD) for a transit. Corey told us that Silversea was paying over $150,000 for this one trip! That will add to the price of a cruise!

About two days before, we attended his lecture that provided us with the history and geography that made the transit so much more meaningful. The complete transit is 77 kms (48 miles) from one ocean to another and took over 75,000 workers more than 10 years to complete – finally reaching its completion in 1914. In simple terms, it elevates ships from the Caribbean part of the Atlantic Ocean (in the direction we were traveling) to a series of lakes and canals and across the continental divide in the middle of the isthmus, then down through another series of locks into the Pacific Ocean. It took us a full day.

We entered the first lock at 8 am just behind our sister ship the Silver Expedition that was on its way to the Galapagos Islands in the Pacific Ocean. We spent three hours on the very top deck where no one ever goes (except for the crowd on the day we transited the canal) in the blazing sun of Panama watching as we entered the first lock. Then the water from above poured in to raise the ship one level; we watched the gates ahead open, then close behind us to elevate us another level, then a third until we emerged in Gatun Lake. 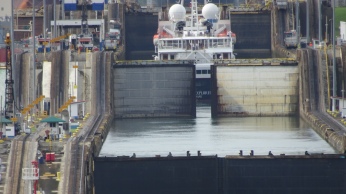 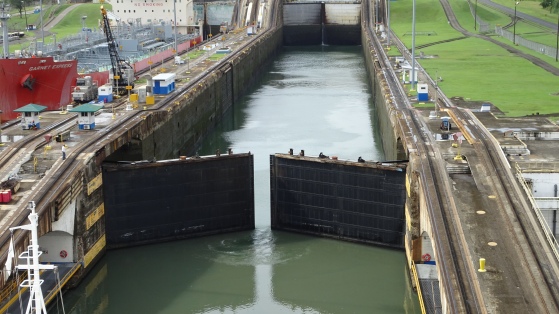 In Gatun Lake, dotted with islands which are really the tops of mountains rising above the level of where the area was flooded and surrounded by Panamanian jungle, we anchored for a few hours. We had to wait our turn to proceed through the canal into another small lake then eventually to the Pacific side locks where the procedure would be reversed. 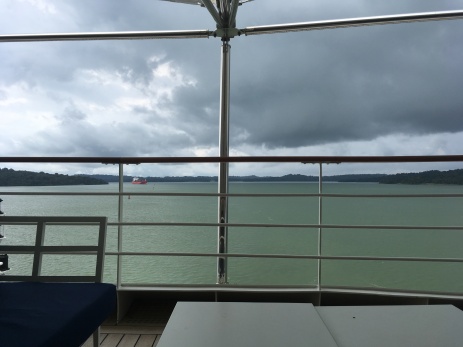 During the transit through the locks, and every once in a while, throughout the day when something interesting was going on, Corey, our on-board lecturer who spent the day on the bridge with the ship’s captain, narrated the passage. Without that narration the experience would have been so much less.

After the first few hours we left the upper deck, we had lunch then ensconced ourselves on the stern deck of the Panorama Lounge with a Sea Breeze (or three) in hand to enjoy the afternoon in the lake. As we began our passage into the canal the sky, which had been threatening for several hours, finally exploded into a thunder storm, the rain pelting the deck as we watched from under the awning. We did some lightning-spotting and felt truly in a jungle as we watched the steam rising from the dense greenery on all sides. It was magical.

As we entered the final three locks, we watched from the stern for a bit then it was time to get ready for dinner. We finally removed ourselves from the Panorama deck and made our way to our suite where we turned the television on to the bridge webcam channel so that we could see ahead as we made our way out of the final lock, passing by Panama City, now glittering in the evening darkness.

Yes, it took from 8 am until after dark for the passage and we had a wonderful day knowing that we were benefiting from the blood, sweat and tears of thousands o workers who put their lives on the line – they dealt with accidents, jungle weather for which they were not prepared and most of all, malaria and other contagious diseases. The opening of the Panama Canal changed forever the destinies of a number of formerly major ports on the west coast of South America, a situation that would become even more obvious to us as we began our passage south to visit them.

If you have some time, and would like to see the transit as we experienced it, here’s our video…

One thought on “A Singular Travel Experience: Transiting the Panama Canal”