Castle – the very word conjures up images of knights and ladies, opulence and intrigue.  And a trip to Ireland would not be complete without a few castles.  So, when we planned our recent chauffeured tour of the Emerald Isle, we made sure that there were castles along the way, both to visit and to stay.  So, come along with us for a trip into history and share our castle experience.

Let’s start by making sure we know what the term castle means (trust us; this is important if you’re to understand the experience!).

Most people think that castles are home to royalty and their servants (that would be a palace by actual definition), but the real definition of a castle has more to do with fortifications and protection – and it was not always for royalty, although given the resources needed to actually build one, clearly they were not erected by the common man – or woman.  So when you consider visiting – or staying in – a castle, you’re really going to be experiencing an historical creation that might have been built by royalty, but more likely was built by other powerful leaders or even families who needed to protect villages or families, or both.

As we left Dublin we headed south toward Blarney, home to the famous Blarney Castle with its legendary stone that must be kissed (we’ll get to that!).  Built some six centuries ago by a powerful Irish chieftain, Blarney Castle itself might take you by surprise.  It is a tower castle, and as such when you go inside you are on the bottom floor of a relatively small tower that once had a number of stories each of whose floor was at one time made of wood so now no longer exists – you can see right up through to the sky.  But you need to make your way up to the top via a narrow, well-worn stone stairway, and as you do, think about what it must have been like to fight your way up or down those narrow stairs!  When we reached the top we were rewarded by a breathtaking view of Blarney Castle’s gardens which were fabulous in their early-spring glory.  And at the top, the Blarney Stone awaits.

In case you’ve forgotten, the whole point of kissing the stone is so that you can acquire the ‘gift of the gab.’  Well, anyone who has ever met Patty in particular will know that this is wholly redundant! But she reluctantly took her place on her back on the stone floor of the open-air battlement, and duly hung her head out backwards into the opening in the stone work as you must, since the Blarney stone must be kissed from underneath while one’s head hangs out hundreds of feet above ground.  In position, she decided that she didn’t really need to kiss the place that hundreds of other lips had just passed over.  But it was worth it all the same.  One legend has it that a certain goddess told the builder of Blarney Castle, who was at the time embroiled in a lawsuit, to kiss the first stone he saw on his way out the door for the gift of eloquence which evidently was bestowed up on him by the ritual.

After that first castle experience we visited a number of other tower castles, eventually making our way to County Mayo and the wonderful Ashford Castle, a very different sort of experience.  Here we stayed for two nights on this magnificent estate whose origins date to 1228.  Through the ensuing centuries, pieces were added until the estate – castle and grounds on the shores of the lake Corrib – were acquired in 1852 by Sir Benjamin Lee Guinness of the Guinness beer fame.    It was eventually sold; in 1939 it was first transformed into what was then referred to as a “first-class hotel.”  It passed through the hands of several owners until this day when it stands as a grand hotel that has been voted the number 1 hotel in Ireland by Condé Nast Traveller many times, and Trip Advisor’s number 1 European castle hotel; it has also garnered a mass of other accolades. 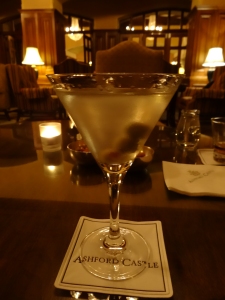 So we spent two days strolling the grounds and exploring the grand building, feeling a bit like royalty ourselves.  As we walked through the striking rooms, we found ourselves swept back in time.  The floors creak a bit but the décor is authentic – and priceless.  Our discerning scrutiny, as always, looks to the service as the piece that is most important in the end, and Ashford Castle did not disappoint (with one small exception of a surly bartender who was reformed by the following evening!).

We spent our last night in Ireland sitting in the magnificent lounge listening to a wonderful trio of singer, pianist and guitarist whose smooth melodies lulled us into complete relaxation.  Their rendition of The Fields of Athenry will always stay with us – haunting us, no doubt, until we return to the Emerald Isle.